Some coffee lovers feel that there’s no coffee outside of espresso.

Others feel that the overly bitter espresso drink is best covered up with heaps of milk foam. And some coffee aficionados crave the milder flavors they find in a good cup of drip coffee.

Espresso and coffee beverages are different, but how? Let’s look at why we brew coffee they way we do and what the different types of coffee offer.

Spoiler: Espresso Is Just a Type of Coffee Drink

While you might think that espresso is a type of coffee bean or a roasting method, it’s not.

To make both coffee and espresso you use coffee beans from the same type of coffee plant. And the beans can be roasted the same way for either coffee types. Nonetheless, lightly roasted coffees are not frequently used as beans for espresso.

Where does the difference between coffee and espresso come in?

The term espresso refers to a rather elaborate way to brew coffee using an expensive espresso brewing method and a lot of skill.

A whole coffee culture surrounds espresso and the beverages based on it.

How Is Espresso Made?

Both espresso and coffee beans come from the same plant, the Coffea plant. People have been consuming the fruit and seed of this plant for about 1,000 years.

It wasn’t until the late 1800s that espresso saw the light of day.

Developed in Italy, it was revolutionary at the time because finally people could make fast coffee.

Rather than the time-consuming manual method of making coffee on the stovetop, baristas could now make the brew in under 30 seconds.

Espresso means pressed, referring to the coffee being brewed with high-pressure water. This method required large machines and the latest technology of the times.

An espresso machine works on a simple principle to make the precious drink. It heats water and then forces that hot water at high pressure through finely-ground coffee beans.

The result is an intense brew. To heat enough water for brewing as well as for steaming milk, an espresso machine often has two boilers.

In the beginning, espresso machines were created to brew large quantities of coffee fast. Over time, they began to brew single servings.

These days, espresso machines have changed in size and design, but they still use the same basic technology.

You can now find tiny countertop automatic espresso makers that produce an espresso-like drink with the touch of a button.

Or you can find the complex, shiny machines that cost more than a new sports car and that you see on the counters of coffee shops.

Then as now, the success of these drinks relies greatly on the skill and understanding of the barista behind the machine.

Many baristas prefer to use dark roast coffee beans, or beans that have been roasted longer, to brew the perfect espressos.

A coffee bean that goes through a longer roasting process is sometimes called espresso beans.

Espresso is loved around the world. What was once a curiosity in Milan, Italy, has taken over the globe. You can find espresso cafes in Hong Kong, Melbourne, or Sao Paolo.

People of all backgrounds love espresso and the beverages based on them. What’s behind this love?

Espresso coffee has attributes that are unequaled. The heavy body, thick crema, and intense tastes cannot be repeated with any other brewing method.

Is making espresso coffee possible without an espresso machine? Technically, no.

Of course, you can apply pressure to coffee grounds, either manually or using a stovetop method. There are plenty of brewing methods that do that, from the classic Moka Pot to the newer Aeropress.

And while the resulting brewed coffee can be amazing, it’s not an espresso shot in the classic sense. The difference is the lack of pressure on the ground coffee.

Lower pressure makes a brew that doesn’t have the thick crema that’s traditional in espresso coffee. And the body of the brew made with those manual or stovetop makers just doesn’t compare.

(An exception to that would be the newer lever-based manual espresso makers. Although they are manual, the lever provides the pressure needed to brew a decent espresso).

What are some popular coffee shop drinks based on espresso?

How Is Coffee Made?

As I already mentioned, brewing coffee history goes back many centuries.

For a lot of that history, coffee grounds were simply steeped in hot water for varying lengths of time. Different types of pots evolved according to the preferred brewing methods in each country.

In the beginning, coffee pots didn’t have a filter, just a narrow spout to carefully pour out the brew.

Or the coffee bean was simply ground so fine it didn’t need to be strained, like with the Ibrik brewing method so popular in Turkey.

Eventually, in the late 1800s coffee drinkers seeking out a more refined brew hit on the idea of brewing black coffee through a sock, and the idea of cloth filters was born.

Drip coffee filters, where near-boiling water drips through the ground coffee in a filter, started to come into fashion in Germany.

Eventually, percolators, which use steam pressure to brew coffee, came into action in Italy. In France, the French Press became a common method.

As more American households were equipped with electricity in the 1950s, electric coffee makers became popular.

They continue to hold a big place in the hearts of American coffee lovers. Americans love a regular cup of drip coffee because it’s easy to make at home, reduces any potential bitterness, and brews a large amount.

As you can see, coffee brewing has evolved enormously over the past thousand years. And in the past hundred years, people have gone from drinking it as a bitter brew to keep awake to elevating it to an art form.

Although many coffee lovers use a regular coffee pot as their preferred method, others in the world of coffee seek ways to make it with manual brewing methods, both simple and elaborate.

How does espresso stack up to regular coffee?

Let’s look at the difference between espresso and coffee, including the caffeine content and flavors.

There’s a big coffee debate about which type of brew has more caffeine, coffee vs espresso.

The caffeine content in coffee largely has to do with how you make the brew and the extraction process. This includes many factors.

Some factors that change the caffeine content in brewed coffee are:

The longer finely ground beans are immersed in water, the more caffeine is extracted. So a longer brewing time creates a more caffeinated beverage.

Finely ground coffee beans extract faster, and additional caffeine will be in the brew.

And lastly, the type of beans you use can affect the caffeine content. Robusta coffee beans have up to twice as much caffeine as Arabica beans.

That’s why beans labeled as espresso beans will often have a certain amount of Robusta beans. Espresso beans are simply roasted dark.

But what does that mean for the cup of coffee you’re drinking?

Keep in mind that’s for an 8-ounce serving size cup of coffee. You can see that per ounce, drip coffee has less caffeine. But who drinks just one ounce of drip coffee?

So if your choice is between one-shot or a whole cup of joe, the single shot of espresso has a lot less caffeine.

That also applies to espresso-based drinks like a latte or cappuccino, which are made with just one shot per serving size. 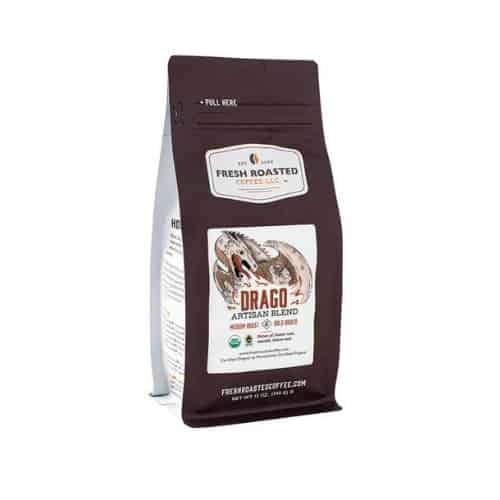 Both coffee and espresso have a world of hidden flavors that many people never get a chance to explore.

In the training sessions I do, I often find that people are shocked when I tell them that coffee has hundreds of flavors.

Most people are used to the basics, like chocolate or nuts. But when they find notes of delicate jasmine or a hint of orange blossom in their cup of coffee, they can’t believe it.

So yes, most coffee tastes like more than of just coffee. And that’s one of the glorious aspects of the brew.

Many pour-over methods let you explore those hundreds of flavors that are waiting for you in a cup of coffee.

What flavors can you find in espresso?

At times coffee drinkers might feel that it mostly tastes bitter. And it is true that a dark roast espresso can have more bitter notes than anything else.

But that’s often due to a poorly made beverage or a problem with the beans in the roasting process.

While you can expect espresso to taste much stronger than filter coffee, you can also discover fine notes of vanilla, fruit, caramel, and nuts in a good shot.

When we talk about coffee beverages, we’re mostly talking about drinks based on espresso.

This stronger brew can stand up to extra ingredients and marks a big difference between espresso beans and an average cup of drip coffee.

That doesn’t just end with the traditional topping of steamed frothy milk for a cappuccino. The drink accepts additions such as syrups, whipped cream, and flavored powders without blinking an eye.

An Americano, while it seems a lot like filter coffee, is a drink based on espresso. It’s a shot of espresso with steamed water added at the end.

Additions to drip coffee, with its lighter body and flavors, tend to be fewer. At home, a cup of coffee might get the addition of flavored creamers or light syrups.

Wrapping Up Espresso VS Coffee

In the raging coffee debate about which gives you a good cup, coffee vs espresso, you may decide to take a stand. Which will you prefer?

In the end, if you love coffee, you don’t have to choose. You can drink both espresso and coffee as part of your daily routine.

You might want to start the day with an invigorating espresso, have a latte for your mid-morning break, and end the workday by unwinding with a comforting cup of drip coffee.

The options in the world of coffee are nearly endless.

Karen Attman is a published author and specialty coffee expert. Otherwise known as the coffee lady, Karen is the Latin American Coffee Academy founder and has previously written about coffee for CNN, Sprudge, and Eater.