You’re staring bleary-eyed at the espresso menu at your local coffee shop. You always order a regular coffee, but the latte coffee options look tempting. Surely an espresso shot would give you a bigger boost… But can you beat just brewed coffee?

I get it. First thing in the morning, such decisions can feel overwhelming. To help you decide, let’s take a closer look at both drinks.

In this article, I’ll explain the ingredients and the process that goes into making a latte vs coffee. Plus, I’ll dispel a few myths about how much caffeine they contain.

A latte combines two classic ingredients in the coffee world – espresso and milk. But it’s how baristas combine the two that makes this drink a favorite with any coffee lover.

A latte starts with ground coffee beans brewed using an espresso machine. The barista then adds steamed milk to that espresso base. Most baristas aim for a ratio of ⅓ espresso coffee and ⅔ steamed milk, with a light layer of foamed milk on top.

A strong espresso coffee is crucial to the tastiness of this milky drink. The large volume of milk could easily overwhelm a weak espresso.

The amount of dairy that goes into this beverage is what defines it.

Latte is the Italian word for milk. (In Italy, a latte is called a caffè latte, or coffee latte, to distinguish it from a simple glass of milk.) Some coffee shops call a latte by the French name, café au lait.

So as the name suggests, a latte is all about the added milk. Baristas often use whole milk; the extra fat creates a satisfying creamy texture. Your barista might top your beverage off with a thin layer of milk foam.

If you’re not a fan of dairy, you can request less milk. Or you can substitute the dairy with a plant-based product such as oat milk, soy milk, or almond milk. But you’ll probably find that non-dairy milks don’t froth up as well as whole milk.

In the United States, lattes are typically served in wide-mouthed cups. The wide cup gives your barista room to add some latte art. Sizes range from 8 to 15 ounces.

If only one espresso shot doesn’t seem like enough coffee, you can ask for a doppio (or two espresso shots). If you want less coffee, ask the barista to go easy when pouring the espresso into your cup.

You can also ask for a latte with more milk, especially when the shot comes from intense dark roast coffee beans.

Want to make a latte at home but don’t have an espresso machine? You can try to approximate the coffee drink.

First, make an intense coffee with a coffee machine, French Press, or even instant coffee. It will be tricky to froth milk without a steam wand. But at the very least, you can heat your milk in the microwave or on the stove.

Making an iced latte is even simpler. Pour the coffee concentrate into a tall glass filled with ice. Add milk, stir, and enjoy!

What Is Coffee & How Is It Made?

But if you order a “coffee” from your local coffee shop, they’ll probably hand you a regular cup of black coffee.

Coffee is often made using a drip coffee machine. You can order this beverage at most coffee shops, and brewing an amazing coffee at home is easy.

Using a drip coffee maker to brew regular drip coffee is the easiest brew method. But you can also use several other brewing methods to make coffee at home.

The French Press is another popular, simple brew method. (Although clean-up is a little messier). Just add ground beans and hot water to the carafe. Four minutes later, you can pour yourself an intense cup of coffee.

How much coffee you use depends on how strong you want your coffee beverage. You can also add milk if you prefer.

Most brew methods rely on hot water to extract the coffee. But you can make iced coffee by adding your brewed coffee to a glass with ice. Or make cold brew if you prefer a more chocolatey taste.

Let’s start with the similarities between latte and coffee. For one, you make both drinks with coffee grounds and hot water. And you can enjoy a latte and coffee both hot or iced.

What are the key differences when comparing a latte vs coffee?

Making regular coffee needs only a drip coffee maker or a manual brewing method. The perfect latte requires an espresso maker. Brewing coffee in this quick method makes a beverage strong enough to stand out amongst a lot of milk.

Let’s talk about milk. Lattes contain a large volume of it, heated with a steam wand. Brewed coffee, meanwhile, is often served black or with dairy, cream, or coffee cream on the side. None of those products can compare to the creamy, light texture of steamed or foamed milk.

A cup with just brewed coffee might not get any additions — no milk, creamer, or syrups. That’s a big leap from the large amounts of dairy in a latte.

The difference in taste is also notable. A latte, often made with dark roasted coffee beans, can have intense yet smooth flavors. In comparison, drip coffee might use medium or light roast coffee and can taste a bit tangy and sharp.

Calorie content can also vary significantly. A dairy-filled coffee latte can have around 100 calories per serving. But regular coffee has just a few calories per cup. If you’re watching your calorie intake, that makes black coffee a winner.

Swapping whole for nonfat milk will help reduce your latte’s calorie and fat content. But keep in mind that some plant-based milks are high in calories. Going dairy-free doesn’t necessarily mean calorie-free.

A cup of black coffee brewed in a drip coffee maker might seem weak compared to an espresso. The taste is deceiving when it comes to caffeine content.

Drip coffee generally has a greater amount of caffeine than a latte.

Lattes are usually large in volume. But they’re mostly dairy, which does not contain caffeine. So it all comes down to the coffee.

A traditional coffee latte uses only one espresso shot. While that concentrated shot might seem like it contains a lot of caffeine, the average amount is just 65 mg.

If your coffee comes from light roast coffee beans, it might have a bit more caffeine. But the difference is minimal.

On the other hand, an 8-ounce cup of drip coffee can have 80 to 140 mg of caffeine. That’s quite a difference!

So how could a cup of coffee have almost double the amount of caffeine than an espresso coffee? It comes down to extraction time. Brewing coffee in a manual method takes several minutes. A machine extracts a shot in 25-30 seconds.

In drip coffee makers, hot water is in contact with the coffee grinds for much longer. The longer the brewing time, the more caffeine in your cup of coffee.

Immersion methods like French Press or cold brew will give you even more of a boost.

What about an iced latte or iced coffee? The only change you make to the beverage is to add ice. So the iced versions have the same amount of caffeine as the hot versions of those drinks.

Wrapping Up: The Difference Between Coffee and Latte

There are two main differences between a latte and coffee: brew method and milk content.

To make a perfect latte, add steamed milk to a shot of espresso. If you’d prefer a less milky beverage, make a regular coffee. You can make brewed coffee in a drip coffee maker or manual brewer.

Is latte healthier than coffee?

It depends. You can drink regular coffee without any milk or sweetener. So black coffee has minimal calories, about five calories for a large mug. A latte coffee has at least six ounces of dairy or plant-based milk. This milk content will increase the calories and fat content of your beverage. Also, many coffee bars add sugar or syrups to lattes. In these cases, lattes become desserts rather than healthy, energy-boosting beverages.

A latte and a cup of coffee are both coffee drinks. (They both come from water plus ground coffee.) But let’s say you order a “coffee” from your local cafe. They will most likely serve you a regular coffee made in a drip coffee machine. If you order a latte, they’ll serve you an espresso-based beverage with lots of milk added.

Does a latte have more caffeine than coffee?

Lattes have less caffeine than regular coffee. The one shot of espresso that goes into an 8-ounce latte has about 65 mg of caffeine. On the other hand, 8 ounces of brewed coffee can have as much as 140 mg of caffeine. Using light rather than dark roasted coffee beans can make a slight difference. But generally, a cup of coffee is potentially twice as potent as a latte. 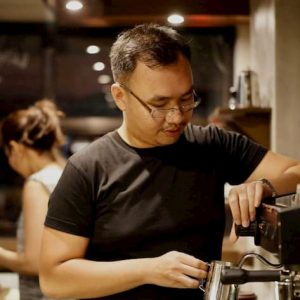