You don’t have to go to Spain to enjoy a Spanish latte. In fact, with a little know-how and the right ingredients, you can make your own at home.

But to get it right, it’s essential to understand how a Spanish latte is different from the more familiar Italian caffè latte.

What sets it apart, and why the different methods and ingredients make for a different coffee.

Read on to learn all about the Spanish latte!

What is A Spanish Latte?

The people of Spain love their coffee and drink it daily. Even children drink coffee in Spain, like in many European countries.

Of course, coffee culture in Spain is very much its own thing. Just like Vietnamese coffee takes a French staple and makes it unique, Spanish coffee differs from even the preferred coffee drinks in the rest of Europe.

Take the Spanish latte itself. Also known as a café con Leche, the Spanish version of coffee with milk differs from what you get in France, Italy, Germany, or Austria.

And the cafe con Leche or Spanish latte isn’t the only version of coffee with milk that Spain prizes.

A café cortado features espresso and milk, like a latte.

Unlike the Spanish version of a latte, the cortado features 1:1 ratio of steamed milk to cut the bitterness of the Spanish coffee. In fact, that’s the reason for the name; “cortado” means “cut.”

In Cuba, this is also known as a cortadito.

The café bombon is a treat for people who like their coffee sweet. Similar to Vietnamese coffee, the café bombon consists of brewed Spanish espresso and sweetened condensed milk.

The resulting mixture is sweet and almost syrupy in consistency and strong and rich at the same time.

Let’s dig deeper into the Spanish latte known as café con Leche and what makes it so distinct from other lattes in the world.

A Spanish latte is a little bit different from the regular version.

Just about every culture has a version of coffee with milk, and each version is just a little bit different from the others in some way.

Café con Leche is made with espresso and milk, and often a little bit of sugar (though this isn’t strictly required).

The common addition of sugar sets it apart from the classic caffè latte right from the start. Even though some people don’t add sugar to their Spanish latte, the fact that it’s almost the default makes it different.

Another aspect that sets the cafe con Leche apart as a distinctly Spanish latte is the proportions of coffee and milk.

The caffè latte usually has more milk than a cappuccino, making it the preferred choice for children in Italy.

A cafe con Leche usually has equal parts scalded milk and strong coffee, making it closer to a cappuccino.

But there’s a key difference there, too: most Spanish latte recipes don’t have milk foam, only the hot milk. The slightly sweeter flavor and the lack of frothed milk make all the difference.

Fortunately, you don’t have to buy a plane ticket to get your hands on a Spanish latte.

It’s easy to make a Spanish latte at home, and if you’re a coffee fan already, you probably already have everything you’ll need.

Ultimately, you need strong coffee, preferably espresso and scalded milk, and there are a lot of ways to make that happen.

Here’s what you need to make a Spanish latte at home:

Before you get down to the task of making a Spanish latte at home, you need to assemble some ingredients and equipment.

While the standard Italian latte can come at the push of a button with the right machine, if you want to keep things authentic, you’ll need a few specific items.

Traditionally, coffee beans in Spain and much of Europe undergo a particular form of coffee processing called torrefacto.

This process involves putting a thin glaze of sugar over the beans before roasting and grinding them. The process imparts a unique flavor to the coffee.

While some people think that torrefaction gives coffee a strange taste, sourcing traditional Spanish coffee produced this way will give your Spanish latte the most authentic flavor.

If you can’t find this style of coffee, you can use dark roast espresso beans to get close and replace the sweetness with sugar or sweetened condensed milk.

While you technically can use any milk you want, from almond milk to skim to heavy cream, the traditional milk for a Spanish latte is whole milk.

Whole milk provides a creamy texture without being overwhelming, and it also has the right balance of sugars and fats to get the ideal result when you heat it up.

If you need a dairy-free option, coconut milk is probably the closest, though you can certainly use almond milk, oat milk, or any other regular milk option that has a nice, creamy texture for making your Spanish latte.

You’ll need water to brew your coffee, of course! As with most brewing methods, filtered water is ideal for your Spanish latte.

Especially If you have hard water, make sure you filter it.

If you don’t like your coffee sweet at all, you can leave this ingredient out.

However, the traditional Spanish latte experience includes a small amount of sugar, and we think that a good Spanish latte is one that’s just a little sweet.

Ideally, try to use demerara or unrefined sugar, since this is the most traditional option.

You can also swap this for condensed milk instead, too. While the typical Spanish latte recipe uses steamed or foamed milk with sugar, there is another variation with sweetened condensed milk too.

Spanish lattes don’t contain enough condensed milk to swap out the regular milk altogether, but instead 1-2 teaspoons worth to swap out for the sugar.

If you own an espresso machine, you can use that to make espresso shots to use in your latte.

However, the traditional method is the Moka pot. Spanish latte lovers are big fans of the Moka pot as a way to make strong coffee anytime they want it, without needing a big machine.

You can also make do with a French press, but avoid using a drip coffee machine for your latte as the base needs to be thick and syrupy like espresso.

The Spanish latte is different from a typical latte in part because it’s served in a smaller cup.

The traditional drinking vessel is something like a French demitasse cup, closer to a teacup than most mass-market coffee mugs.

There are a few options for heating up your milk.

If you have an espresso machine, you can use the steam nozzle to get your milk of choice nice and hot, but remember that you don’t want textured milk or froth milk for a Spanish latte.

If you go this route, you can just use a milk pitcher that goes with your espresso machine.

A better option is a small saucepan on your stove or a microwave-safe container so that you can get the milk hot without any foam or froth.

Unless you’re using an espresso machine, you’ll want to use one of these methods for heating up the milk for your Spanish latte.

Both will give you the right results. You just have to watch the milk to make sure it doesn’t boil.

How to Make a Spanish Latte

Once you have all of your ingredients and equipment together, you can get down to the business of making this delicious coffee recipe at home.

The good news is that the Spanish latte is very easy to prep! Here are the steps to make the traditional Spanish latte:

If you’re using an espresso machine, simply pull as many shots of espresso as you want for the number of servings you’re making.

For a stovetop espresso maker, follow the manufacturer’s guide for brewing a pot. You’ll want 1-2 shots of espresso, depending on the size of your cups.

If you’re using your stove to heat your milk, simply pour the milk into a saucepan and simmer it over medium-low heat.

You want the milk to get hot, but make sure to watch it–you don’t want it to boil. If you’re using your machine, you can use the milk frother. Just try not to create a foamy texture if you can avoid it.

For the microwave, heat the milk in a microwave-safe container for one minute, then for 30-second bursts until it’s thoroughly hot but not boiling.

Add sugar to your cups

if you don’t want sugar, skip this step. But if you’re going for the full Spanish latte experience, add a teaspoon of sugar to each cup before you pour in the shot or shots of espresso.

Pour each shot of espresso

if you’re making a large Spanish latte, you’ll want two shots of espresso to get the right proportions, but for the classic serving, you only need one shot of espresso for each cup you make. Stir the espresso and sugar to dissolve.

If you’ve used your steam wand to heat up your milk, there will probably be some foamed milk at the top, even if you were careful.

Use a bar spoon to hold back the foam as you pour the milk into your cups. If you’ve used the stovetop or microwave method, simply pour the scalded milk into each cup.

Keep in mind that you don’t want the milky result that you get with a typical latte in Italy. The proportions should be about equal parts hot milk and strong coffee.

If you prefer cold coffee drinks, or if the idea of so much hot coffee during the warm summer months isn’t appealing, you can also make an iced Spanish latte with just a few tweaks.

How to Make an Iced Spanish Latte Recipe

All you have to do to make this espresso-based drink hot weather friendly is make a few changes to turn the hot drink into an iced Spanish latte:

Brew your espresso shot as you normally would, and pour it into your cold glass with a teaspoon of sugar. Dissolve the sugar, and then add cold milk and ice cubes, and you have an iced Spanish latte to beat the heat! 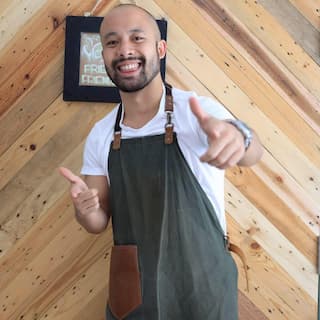 Miguel Papa is a coffee fanatic with a passion for brewing. During the weekdays, you can find him experimenting with different drinks while he works as a barista. Otherwise, he’s likely writing here for Sip Coffee or enjoying the outdoors.